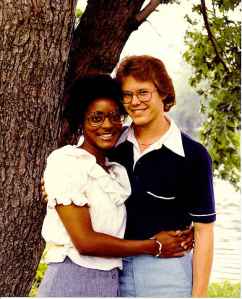 Our Hearts Knit Together

We met on staff at Michigan State. When Lorna arrived on campus Dirke already was working with two African American bible studies of men. When he heard about a Black female staff joining the team He prayed that God would give him a good relationship so he could learn all he could about the African American culture. They worked in ministry together for a year and a half. God began to knit their hearts together as they laughed, worked, studied, exercised, and prayed together. God not only answered Dirke’s prayer to understand the African American culture, BUT, doubled the blessing by joining Dirke and Lorna in marriage. You have to be careful what you pray for :)!

DIRKE: My father was a minister so I grew up around the church. Although I knew much about God and would have been considered religious by the average church-goer, I had not placed my faith in Christ for salvation. My high school days were filled as many typical students are with sports and an insatiable desire to be accepted and to fit in with my peers. At college I was confronted with Christ’s message through a Campus Crusade for Christ (CCC) staff member. Leery at first, I soon began attending their weekly meetings. I immediately recognized there was something true of them that wasn’t of me. Shortly after, I became a Christian by placing my faith in Christ. As I became involved in the group, God changed my life. I began to learn how to study the Bible and depend upon God’s promises. I soon learned how to share my faith and train other students in the things I was learning. I was accepted on staff with CCC. My first assignment was at Michigan State University.

LORNA:
I’ve always enjoyed music and art. My greatest accomplishments were in track. During my college years I made the Olympic team as an alternate in two events (100 meter hurdles & Pentathlon). The following year I represented the U.S. in Moscow. But amid the medals and accomplishments, there still remained an emptiness in my life. I turned to relationships with men and Eastern religion. Neither provided the security, peace and success I was seeking. While at college, Cru sponsored a speaker in one of my classes. After filling out a comment card, I was contacted by a Cru staff member. Christ was explained as a man who would never leave me nor forsake me. I knew then this was the relationship I was looking for. As I saw God change my life, reconcile my relationship with my mother and use me to influence others for Christ, I knew to invest in other lives was the greatest legacy I could have. I joined Cru staff. My assignments have been Cru Headquarters which at the time was in San Bernadino, CA; Michigan State University; University of Minnesota to Orlando, FL.
To read about our current ministry responsibilities, click on “Our Ministry” in the menu at top.